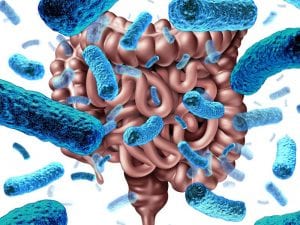 At a young age, Ethan was diagnosed with moderate to severe autism. By age seven, despite heroic efforts by family and rehabilitation specialists, his vocabulary, diet and social interactions were all extremely limited. He wasn't even potty trained.

Then one morning, just four weeks into a special clinical trial, Ethan’s mother Dana awoke to him with a big smile on his face saying, “Good morning mom.” The transformation was miraculous, a side of her son she had never seen before, and she burst into tears of joy.

It was a miracle of poop. Not quite the raw stuff out of the toilet but rather processed gut microbial organisms from a highly screened donor, which Ethan had been taking mixed in with his drinks as part of the trial.

"There is a very high correlation between [gastrointestinal] severity and autism severity—for language, for social interaction, for behavior, all of the core symptoms of autism,” says Jim Adams, a professor and autism researcher at Arizona State University. He had seen the connection fist hand when his daughter was diagnosed with ASD. “The question is, is this because of the pain and discomfort of the GI problems, or is it more than that?”

When Adams dug into the scientific literature, he found that dysbiosis, or a disruption of the normal ecosystem of bacteria and other organisms in the gut, can influence both ASD and GI symptoms. Treatment with vancomycin, a powerful antibiotic that is not absorbed in the bloodstream but stays in the gut, could bring temporary relief. But an antibiotic can only be used for a short period of time before bacteria begin to develop resistance to it.

More than a decade ago, a theory began to emerge of a gut-brain connection, where a dysfunction in the gut could also affect brain activity. “Seventy percent of our nerves that go into the central nervous system go into our gut. Why is that?” asks Sarkis Mazmanian, a medical researcher at the California Institute of Technology. Mazmanian noted that in germ-free mice, with no bacteria in their gut, “things like anxiety, locomotion, depression and even brain development seem to be altered” compared with normal animals.

Mazmanian and a team of researchers demonstrated this gut-brain connection in a mouse model of autism in 2013. Three years later, the team did the same for Parkinson's disease. And recently they showed that transplanting feces from a person with autism into germ-free mice would produce many symptoms of ASD in the animals.

A healthy gut ecosystem contains about a thousand different types of bacteria, as well as archaea, fungi and viruses, though the specific organisms and their numbers can vary from person to person. In contrast, the variety of bacteria found in people with ASD is about 25 percent lower than in healthy people. Their guts are missing hundreds of different species of bacteria, often ones that are important to fermentation and producing short chain fatty acids that influence health.

Adams looked to pull together all the threads of these different lines of research by conducting a study on the efficacy of fecal transplants in kids with ASD. His team at ASU, the Autism/Asperger’s Research Program, recruited an expert at identifying bacteria in the gut, Rosa Krajmalnik-Brown, better known as Dr. Rosy. Little was known about fecal transplants in children at the time the study was proposed, so the FDA first required a small, preliminary safety study, limited to kids age seven or older.

The study enrolled 18 children, ages 7 to 18, with a diagnosis of ASD and significant GI problems. The regimen was exacting but relatively kid friendly. First the antibiotic vancomycin was used to knock down the number of microbes in their guts. Then the kids received daily doses of purified microbes from the guts of healthy donors, which were suspended in a liquid and mixed in with drinks, along with an antacid to reduce stomach acids that can destroy the microbes before they reach the intestines. The gut treatment continued for ten weeks.

The ASU researchers didn't see much of a response at first. It is likely that the initial dysbiosis had damaged some of the cells lining the gut, as occurs in patients with irritable bowel syndrome (IBS), and it took some time for those wounds to repair enough to support colonization by the donor bacteria. But halfway through the regimen, most participants showed increasing signs of improvement.

Adams was surprised to hear parents say that their kids continued to show improvement in ASD-related behavior long after the study was completed. The team decided to do a two-year follow-up to see what was going on.

An independent professional evaluator using the Childhood Autism Rating Scale (CARS) found that symptoms were 23 percent less severe at the end of treatment than at the start; two years later that had improved to 47 percent. Initially 83 percent of participants had been rated on the severe end of the ASD scale, but after the two-year follow up, that number had dropped to 17 percent, while 44 percent had improved to the point that they fell below the ASD diagnostic cutoff.

Measurements using the parent-rated Social Responsiveness Scale (SRS) assessment showed parallel improvements, according to the follow-up paper published in April of this year. The gut microbiome, it seems, could provide a new tool to treating ASD.

After the follow-up, participants still showed healthy microbiome diversity, but the bacteria populations in their guts had shifted away from resembling the donor to become more personalized. The changes reflected the diets, environmental exposures, immune systems and genetics unique to each individual.

The team does not claim that all the improvements spring from the gut bacteria treatment, however. While Adams believes that reestablishing a healthy gut microbiome benefits the gut-brain axis that has gone askew in ASD, he also thinks that simply removing the pain and distraction of a dysbiotic gut can help kids concentrate, focus, and benefit from speech, behavioral and other therapies offered by state and social services organizations.

“Unfortunately these GI symptoms generally have been ignored, even when parents of children with autism have reported their child's behavior improves when they treat those symptoms,” says Paul Ashwood, a microbiologist studying ASD at the University of California Davis. He acknowledges the limitations of Adams and Krajmalnik-Brown’s study, such as small sample size and the influence of outside factors, but says “the data is very interesting and should be followed up.”

As with any new approach to treating a medical condition, initial success raises more questions than it answers. Will the approach benefit a broader group of ASD patients, including those who do not suffer significant GI distress? Is vancomycin needed to knock down the existing microbial ecosystem prior to an influx of healthy gut bacteria? What is the best duration of the treatment? It will take time and multiple studies to answer these questions, but Adams is optimistic that a licensed microbial treatment for ASD will become available in a few years.

In the meantime, the ASU team is preparing another trial for children. Their collaborators have developed a pill form of the microbial transplant that they believe will bypass the issue of stomach acid and deliver a more consistent product to the gut. The pill is already being used in other studies, and Adams believes the change will deliver more consistent results than their first trial.

For her part, Dana is delighted by the “fantastic progress” that Ethan, now 12, continues to make. He has met all the goals set by speech and occupational therapists and continues to work on social and life skills, such as learning how to understand his own emotions and those of others and articulating what he feels. If medical researchers like the ASU team can continue to make progress developing a microbiome treatment for ASD, many more kids could benefit from the multifold value of a healthy gut.