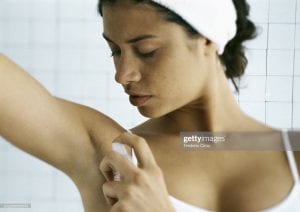 Parabens are chemicals that serve as preservatives in antiperspirants and many cosmetics, as well as sun lotions. Previous studies have shown that all parabens have estrogenic activity in human breast cancer cells.

Another component of antiperspirants, aluminum chloride, has been found to act similarly to the way oncogenes work to provide molecular transformations in cancer cells. According to the authors of the editorial review, the research shows “signals of concern that such compounds are not as safe as previously generally considered, and further research is warranted.” Furthermore:

“The data from this latest study, the most extensive examination of parabens in human breast so far published, confirms previous work and raises a number of questions on the entire parabens, personal care product and human health debate, particularly relating to the source and toxicological significance of the paraben esters.”

The featured study by Barr et.al. discovered one or more paraben esters in 99 percent of the 160 tissue samples collected from 40 mastectomiesiii. In 60 percent of the samples, all five paraben esters were present. There were no correlations between paraben concentrations and age, length of breast feeding, tumor location, or tumor estrogen receptor content. The median values in nanograms per tissue for the five chemicals were:

While antiperspirants are a common source of parabens, the authors note that the source of the parabens cannot be established, and that 7 of the 40 patients reportedly never used deodorants or antiperspirants in their lifetime. What this tells us is that parabens, regardless of the source, can bioaccumulate in breast tissue.

And the sources are many. Parabens can be found in a wide variety of personal care products, cosmetics, as well as drugs. That said, it appears the dermal route is the most significant form of exposure. In the featured editorial, Philip Harvey and David Everett explain why:

“… [T]he dermal route of exposure is considered more plausible when intact esters are detected, and other authors reporting human exposures and body fluid concentrations of paraben esters consider cosmetics of some form or another as the likely sources… This is because the metabolic esterase activity of the gut and liver (relevant to oral exposure) is considered to greatly exceed that of the skin, and oral exposures would result in rapid liver metabolism of the esters to produce the common metabolite p-hydroxybenzoic acid… Paraben esters typically used in cosmetics pass through human skin in vitro/ex vivo, and Ishiwatrai et.al. (2007) has shown persistence of unmetabolized methylparaben in the skin”

Safety of Parabens has NEVER Been Established…

As incredible as it sounds, despite the fact that parabens are used in such a wide variety of products, the toxicology of these chemicals has barely been investigated. There is a complete lack of modern toxicology studies on these ingredients, and according to the featured review, not a single study on the chemicals’ carcinogenity follow acceptable regulatory standard carcinogenity study protocols.
The authors point out that one rat study from 1956 is still used as “the pivotal evaluation upon which human safety is judged!”

“This may be acceptable for certain chemicals for which there is limited human exposure but not for chemicals such as parabens for which such a large population is exposed, and which show significant tissue concentrations,” they write.

~~ The Estrogenic Activity of Parabens ~~

Estrogens, whether synthetic or natural are a primary risk factor for breast cancer. Approximately 20 different studies have established that parabens have estrogenic activity, which makes them relevant when it comes to estrogen-sensitive cancers. A common excuse used to defend the absence of toxicological studies is that parabens are weak in terms of potency. For example, propylparaben and butylparaben are approximately 30,000 and 10,000 less potent than estradiol, respectively.

“However, estradiol occurs in breast tissue in the pictogram per gram of tissue range… but the results reported by Barr et.al. [the featured study] show tissue concentrations of parabens, in the worst cases, in the microgram per gram of breast tissue range, which is one million-fold higher than that of estradiol. Clearly, the magnitude of exposure would seem to more than compensate for the reduction in potency,” Harvey and Everett write.

But that’s not all. A 2011 study reported that methylparaben promotes cell cycling and makes human breast cells more resistant to apoptosis, which, according to the authors can provide the molecular basis for malignant tumor proliferation. Harvey and Everett also cite another study from 2007, which found that propylparaben and butylparaben cause detectable DNA damage.

Harvey and Everett point out that the hypothesis that chemicals in personal care products might be harmful to your health and contribute to breast cancer has a basis in two key observations:

Breast cancer rates have increased in recent decades, which correlates with many lifestyle factors that have undergone significant change during that same time, such as diet, obesity, and use of personal care products containing untested chemicals

Tumors are disproportionately located in the upper, outer quadrant of the breast, and more tumors are found in the left breast than the right, suggesting it may be related to products applied topically to those areas (most people are right-handed, which could make you a bit more heavy-handed when applying products under your left arm than your right)

In my view, one of the key observations by Harvey and Everett is that:

“The tenet that there “is no evidence that personal care products (antiperspirants or deodorants) are related to breast cancer” is technically correct, but only because studies have not been conducted to investigate any relationships. Such arguments provide false assurance by masking the inadequacies of empirical evidence and knowledge.”

Antiperspirants work by clogging, closing, or blocking the pores that release sweat under your arms—with the active ingredient being aluminum. (If you are using a deodorant-only product it is unlikely to contain aluminum but might contain other chemicals that could be a concern, such as parabens.) Not only does this block one of your body’s routes for detoxification (releasing toxins via your underarm sweat), but it raises concerns about where these metals are going once you roll them (or spray them) on.

Like parabens, aluminum salts can also mimic estrogen, and, just like the featured study, previous research has shown that aluminum is also absorbed and deposited into breast tissueiv. The researchers suggested raised levels of aluminum could even be used as a biomarker for identification of women at increased risk of developing breast cancer.

Aluminum salts can account for 25 percent of the volume of some antiperspirants, and a review of the common sources of aluminum exposure for humans found that antiperspirant use can significantly increase the amount of aluminum absorbed by your body. According to the review, after a single underarm application of antiperspirant, about .012 percent of the aluminum may be absorbedv. This may not sound like much until you multiply it by one or more times a day for a lifetime, which adds up to massive exposure to aluminum—a poison that is not supposed to be in your body, and may be more toxic than mercury. Aside from vaccinations, your antiperspirant may be your largest source of exposure to this poisonous metal!